London grocery stores are essential to visit if you are spending an extended period of time in the city, looking to visit London on a budget, or just want a taste of how the locals live. While everyone knows quite a bit about London in general [the Queen! Big Ben! Harrods!], there isn’t much information out there about grocery shopping in the city! Grocery stores in London are easy to navigate and visiting one of the many local stores is a great experience for locals and foreigners alike!

Visiting one of London’s grocery stores will allow you to get a taste for shopping as if you lived in the city. It is also a great way to save money when buying snacks and drinks during your travels. The best part? There are hundreds of stores spread all around the city so if you are looking to get your shop on, you won’t have to look far for the nearest grocery store in London!

Save money on your trip to London! Get a FREE $55 Airbnb coupon by using our code when you book! 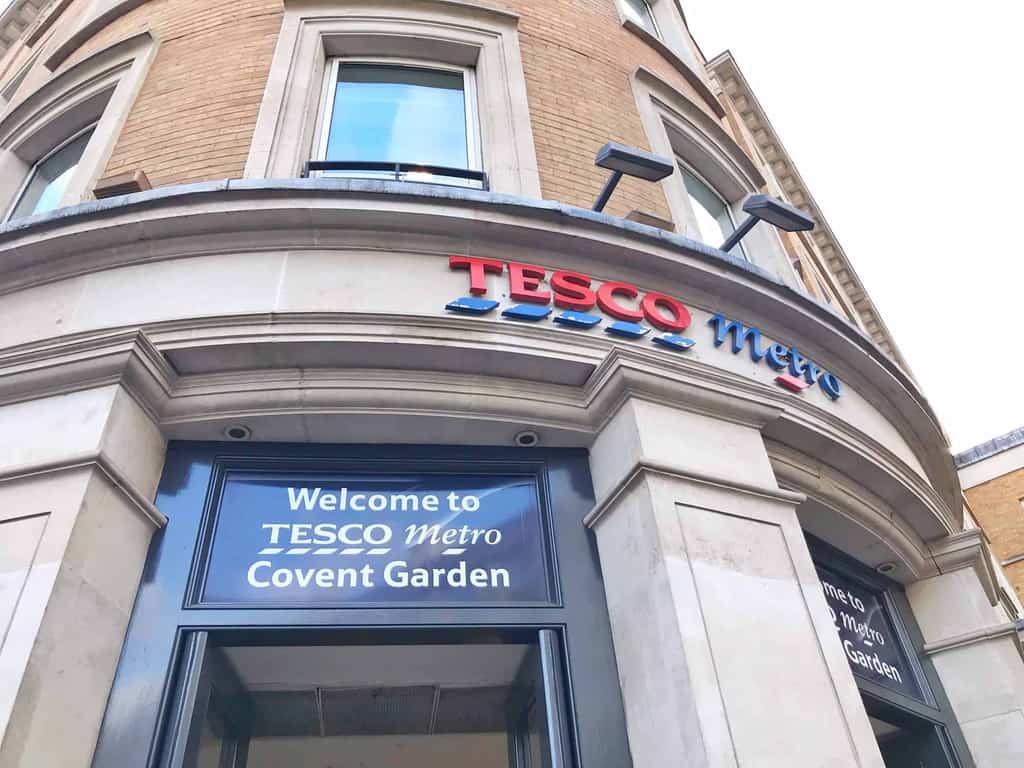 Where you are from, you may call them grocery stores, but Brits wouldn’t be caught dead calling them that! These stores where we all go shopping for yummy food are known as supermarkets in London! If you are on the street searching for a London grocery store and you can’t find it and you want to ask a local, simply tell the local you are looking for supermarkets in London and ask for recommendations. While this may seem like a small change, it is important to be culturally aware when traveling.

In the United States, we call it “grocery shopping” and although we know the word “supermarket” we would never ask someone where the supermarkets in London were unless we knew that it was the culturally acceptable thing to do. Our first thought would be to ask for London grocery stores! Now of course, people in London aren’t completely oblivious to the word grocery store so if you ask where the grocery stores in London are they will, of course, know what you are talking about. But if you want to fit in a bit and do as the locals do, then be sure to call these stores supermarkets in London! 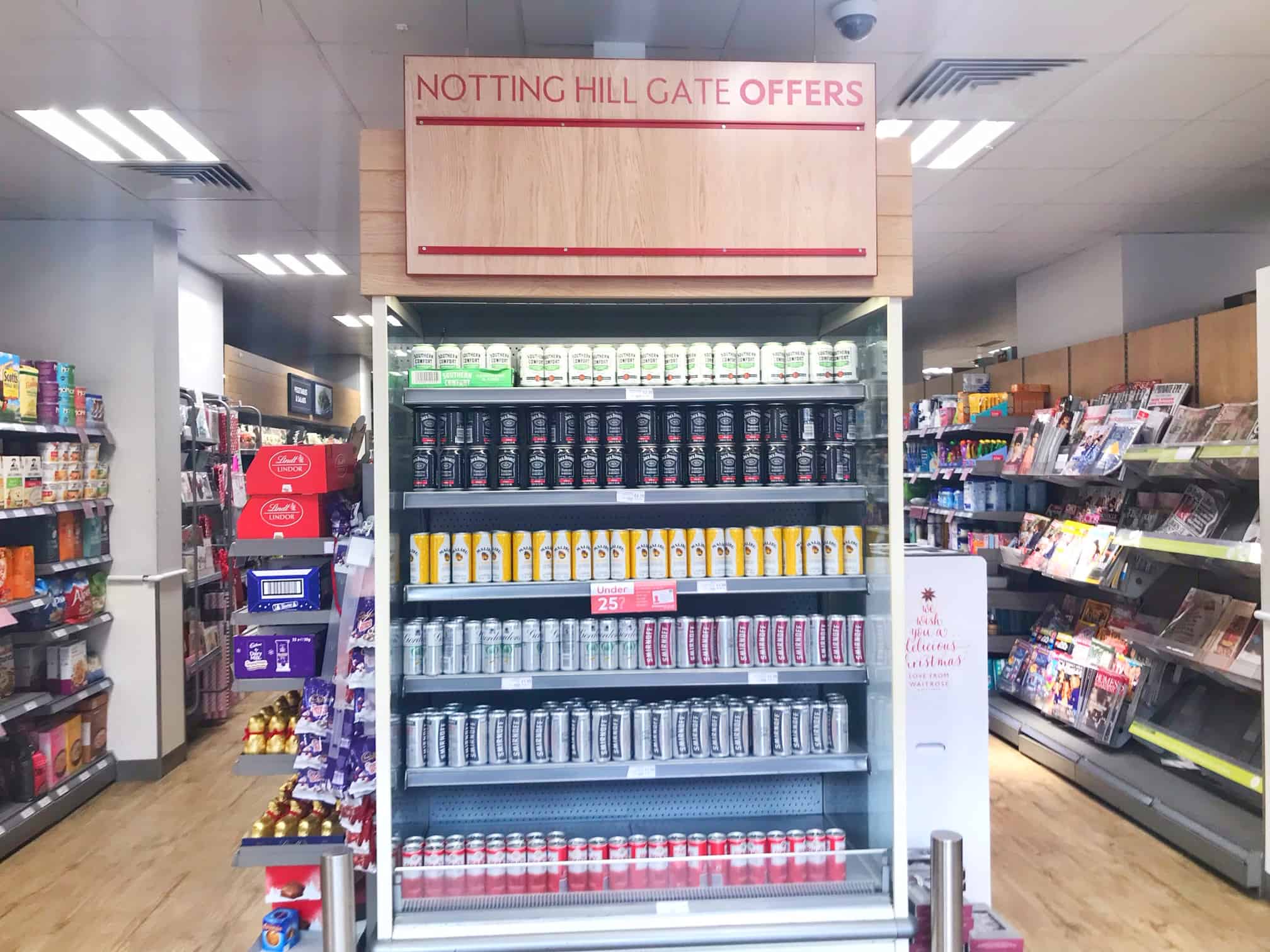 #2. The Prices At London Grocery Stores Aren’t All That Expensive

All big cities are expensive and it is common knowledge that London can be quite pricey to travel around. Couple big city prices with the British Pound being a strong monetary form and it is easy to see why you can break the bank going out to dinner in London. Surprisingly, the prices at supermarkets in London aren’t all that bad, even when compared to other large cities around the world! Of course, when doing this price comparison, we must compare the London supermarket prices to those of grocery stores in New York City or Paris, not to a small town in order to be fair!

At the supermarkets in London, the price of candy and snacks was between one to two pounds! In NYC, Candy and snacks would be at least three to four dollars minimum. A large bottle of ginger ale rang in at less than a pound and organic soy milk rank in at three pounds. If you are worried about visiting London on a budget or just hate spending a ton of money, we highly encourage you to visit the London grocery stores. Visiting the supermarkets in London allows you to stock up on snacks, drinks, and fresh fruits that you can eat to save money while exploring the city. 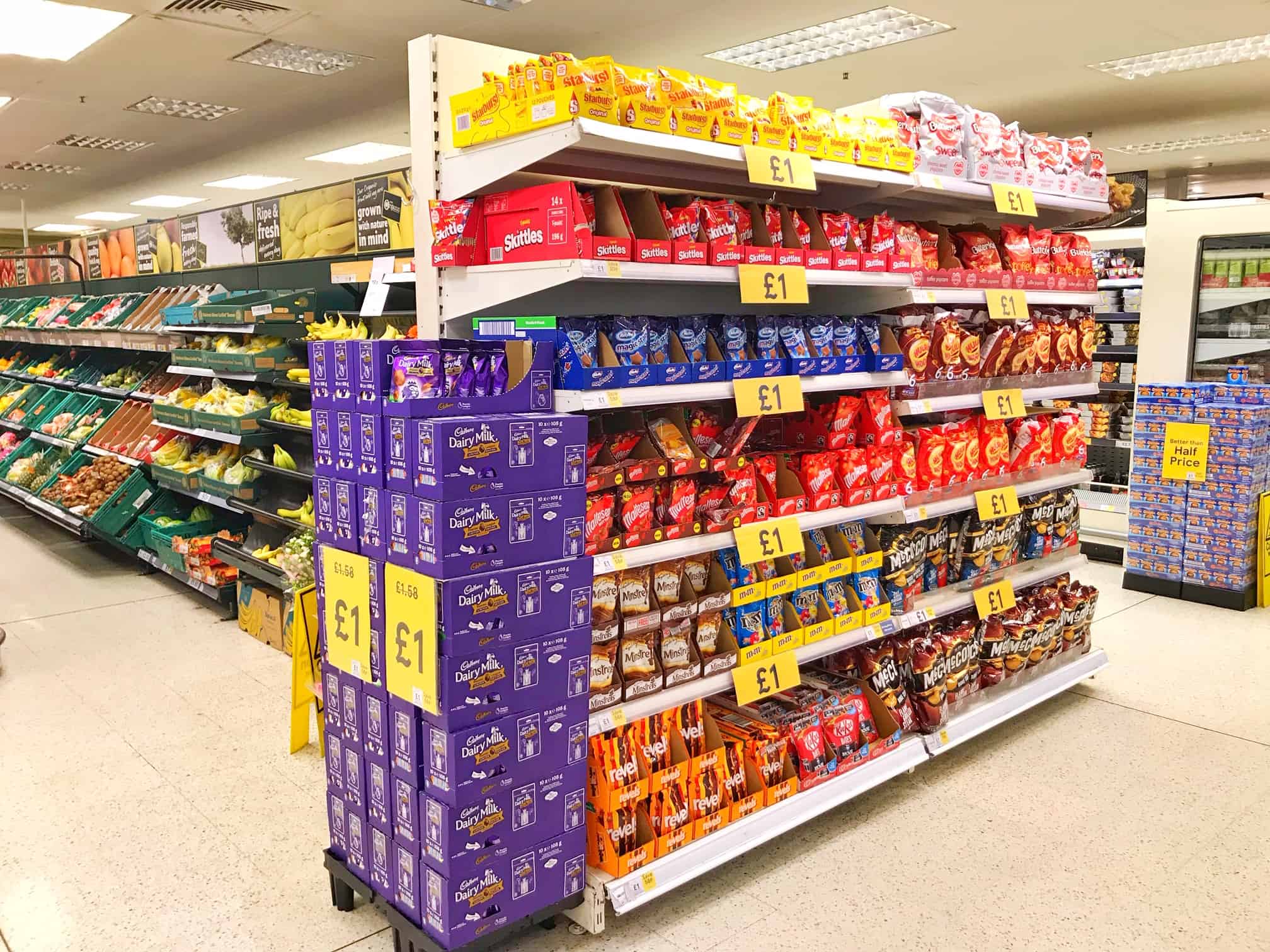 We even discovered that some supermarkets in London go so far as to have an entire salad bar! These aren’t giant grocery stores like Walmart in the United States. These are smaller stores that still manage to provide quality food and drink options to customers. We were pleased at the offerings at the supermarkets in London and really appreciated that they offered delicious fresh food that was healthy and more affordable than buying out at a restaurant or fast food place. 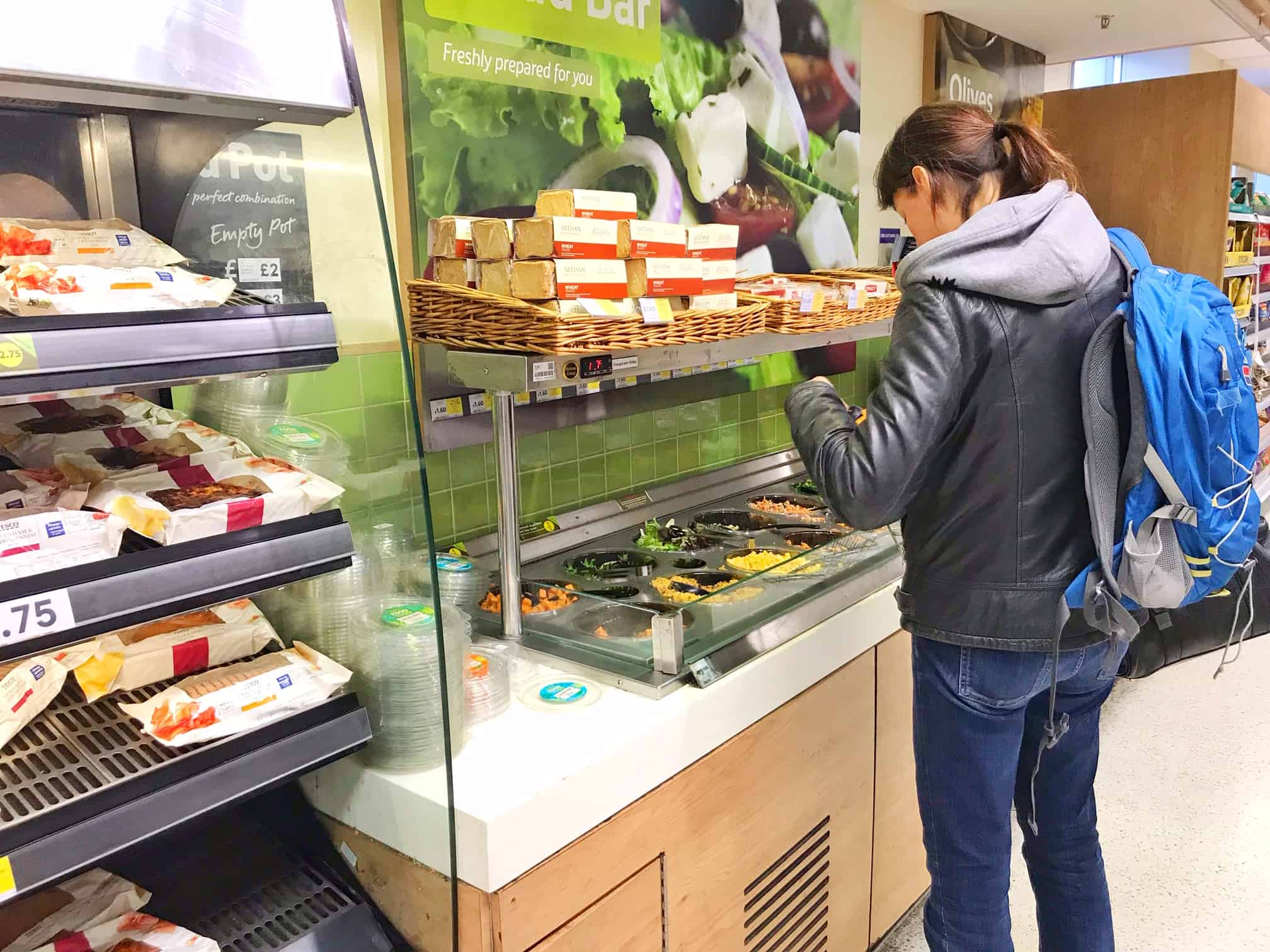 #4. Self-Checkout Is Quite Popular At Many London Grocery Stores

While self-checkout is a thing in the United States, it is more of an afterthought. Especially in big cities, checkout clerks still ring up your order. That being said, self-checkout is quite popular at many supermarkets in London. This allows for a sped up process so you can get in and get out quicker. If you are reading this and are from the UK, this may seem normal to you, but if you are from the rest of the world, having mainly self-checkout options is different.

Every London grocery store we popped our heads into had 90% self-checkout and 10% cashier checkout. We can’t speak for every grocery store there is in London, but the practice of automation and self-checkout is far more popular at supermarkets in London than it is in other parts of the world. Thankfully, there is an employee that runs the self-checkout area so if you have any problems, your self-checkout machine will blink “red” and help will be on the way!

#5. Vegan, Vegetarian, And Gluten Free Options Are Easy To Find At Supermarkets In London

Vegans and vegetarians rejoice!! London supermarkets are a wonderful place for you! Even the smallest little supermarket in London is bound to have plenty of vegan and vegetarian options. Gluten Free is also very important in London so if you are allergic to Gluten, you are in good hands at the London grocery stores! We actually found London to be the most vegan and vegetarian-friendly city we have ever traveled to. Much more so than Portland, San Francisco, or Berlin, which is saying a lot because all of these places are touted as being vegan havens.

If you are vegan, vegetarian, or gluten-free, you will have absolutely no trouble walking in almost any supermarket in London and finding something that fits your needs. Vegan, sugar-free, nut milk? Check! Those fresh food items found in London grocery stores we discussed above such as sandwiches and wraps? Not only will you have an option for vegans/vegetarians, but you will also most likely have multiple options at the fresh food department at the supermarkets in London. We were quite thrilled and pleased by how forward-thinking London grocery stores were and it made the shopping experience quite pleasant. If you have food allergies of any kind, expect to be shown kindness and helpfulness when visiting supermarkets in London! 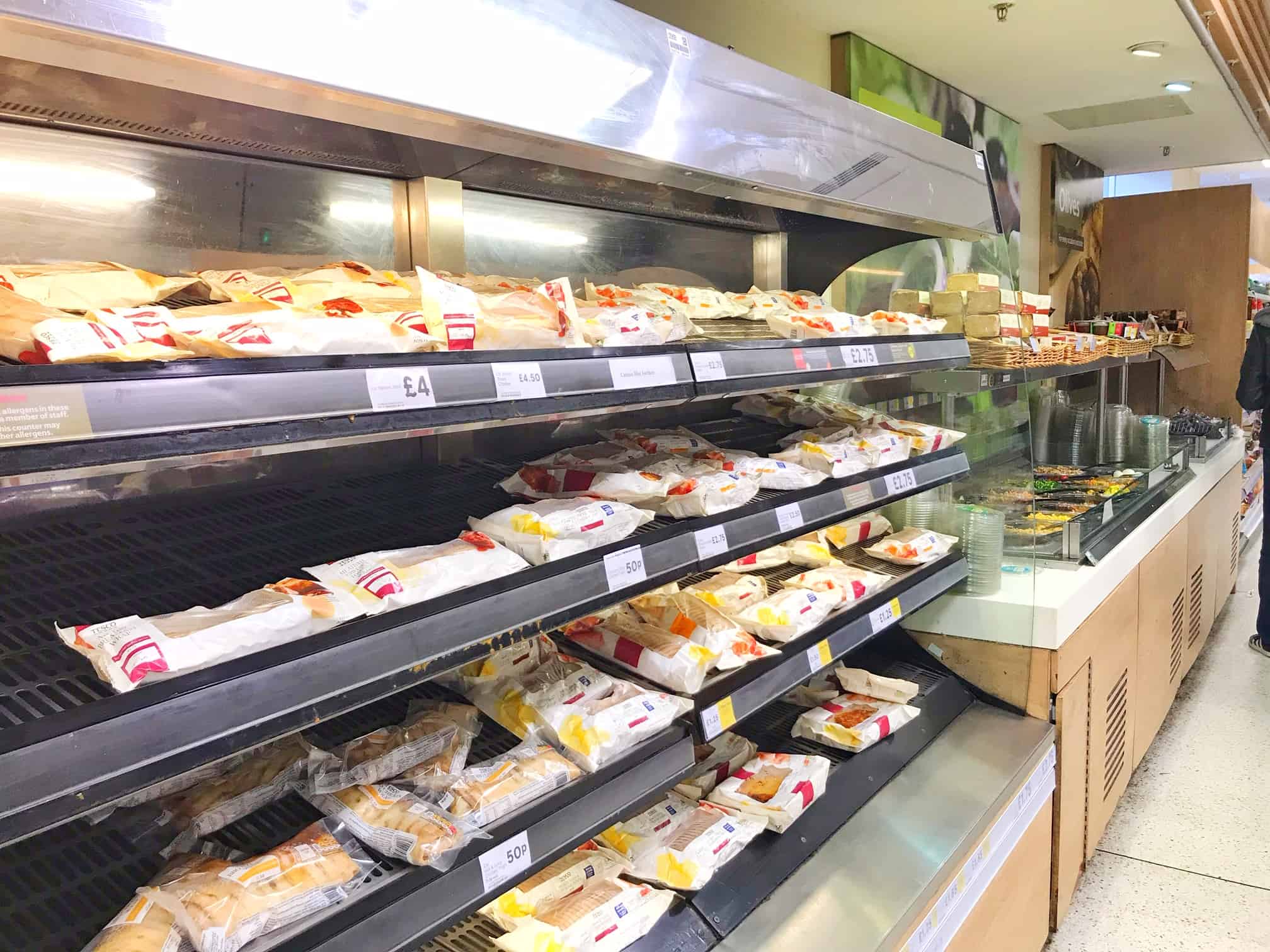 Different Types Of Supermarkets In London

As with any large international city, there are thousands of supermarkets in London. We could go on for quite a long time about the different companies and stores that you may see around London, but we have narrowed it down to a few popular London grocery store names that you should know when going into your visit. 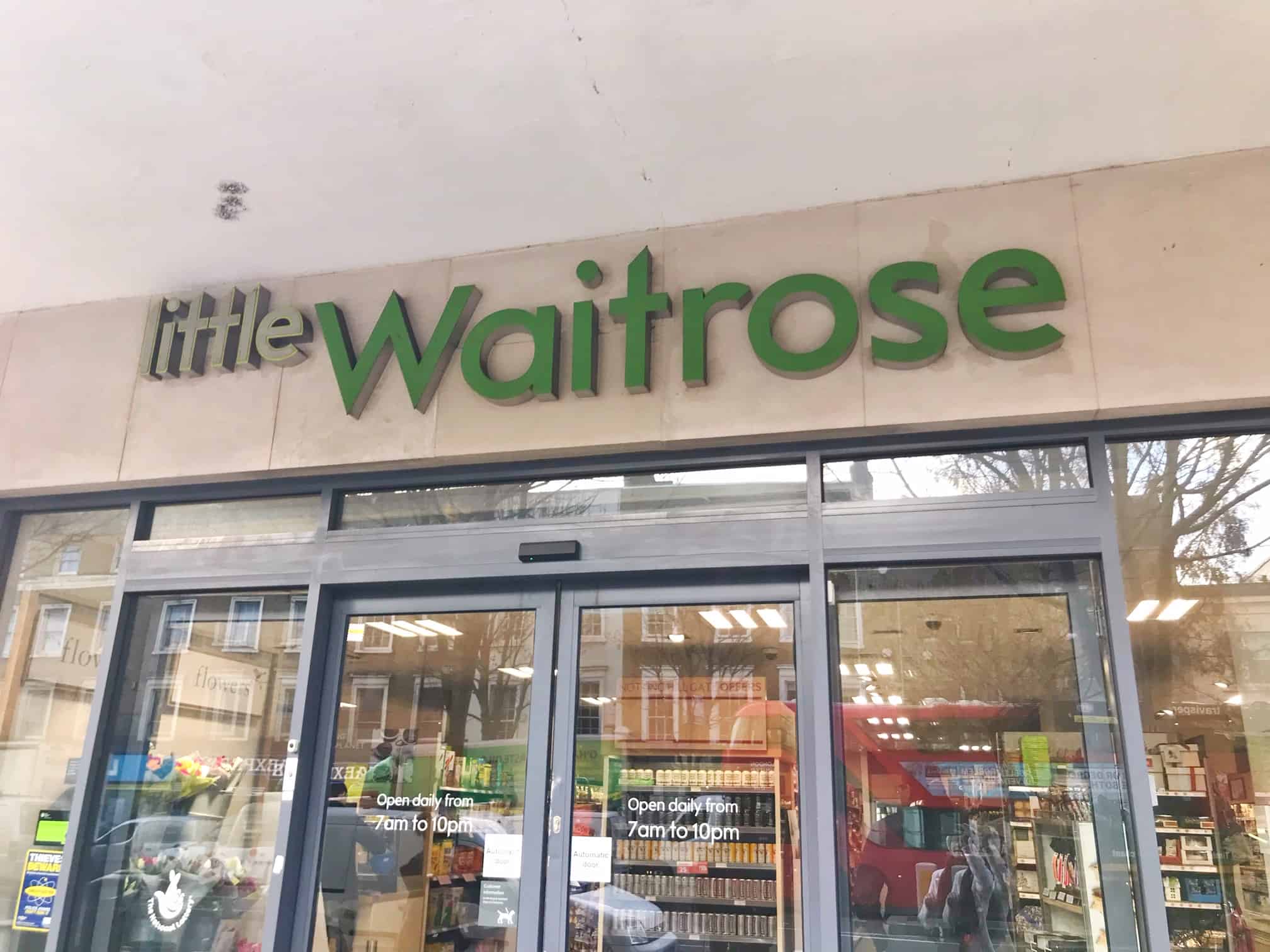 By market share, Tesco is the largest supermarket chain in the UK and if you are visiting supermarkets in London, chances are pretty darn high you will come across a Tesco! Tesco is an affordable grocery store brand that is found all around London. In the more touristy areas, we saw a Tesco supermarket on almost every street corner [or so it felt]. Prices were good and we went in more than a few times!

After Tesco, Sainsbury’s is the second largest supermarket company in the UK. It is also popular in London depending on which area you are in. Sainsbury’s offers a true London supermarket atmosphere because you can find groceries and home items all in the same store. Although this may sound normal for someone from the United States or Canada, this isn’t always the norm at grocery stores in London!

Aldi and Lidl are the leading bargain supermarkets in London. If you are looking for the cheapest groceries possible, find yourself an Aldi or Lidl in London. That being said, the food is high quality, especially at Aldi. Thankfully, we have Aldi in the United States too and we just love shopping there. Prices are so affordable and organic/vegan/fresh food is always easy to find! If you are really trying to save when visiting London grocery stores, Aldi or Lidl are perfect for you!

Waitrose is one of the supermarkets in London that focuses on British goods. If you are really looking to live like a local, Waitrose allows you to shop products online and get free delivery on any order! I say live like a local because we have grocery delivery here in the USA and only locals use it! Waitrose is a popular supermarket chain in London that you may see so keep your eyes open if you want British-focused goods! 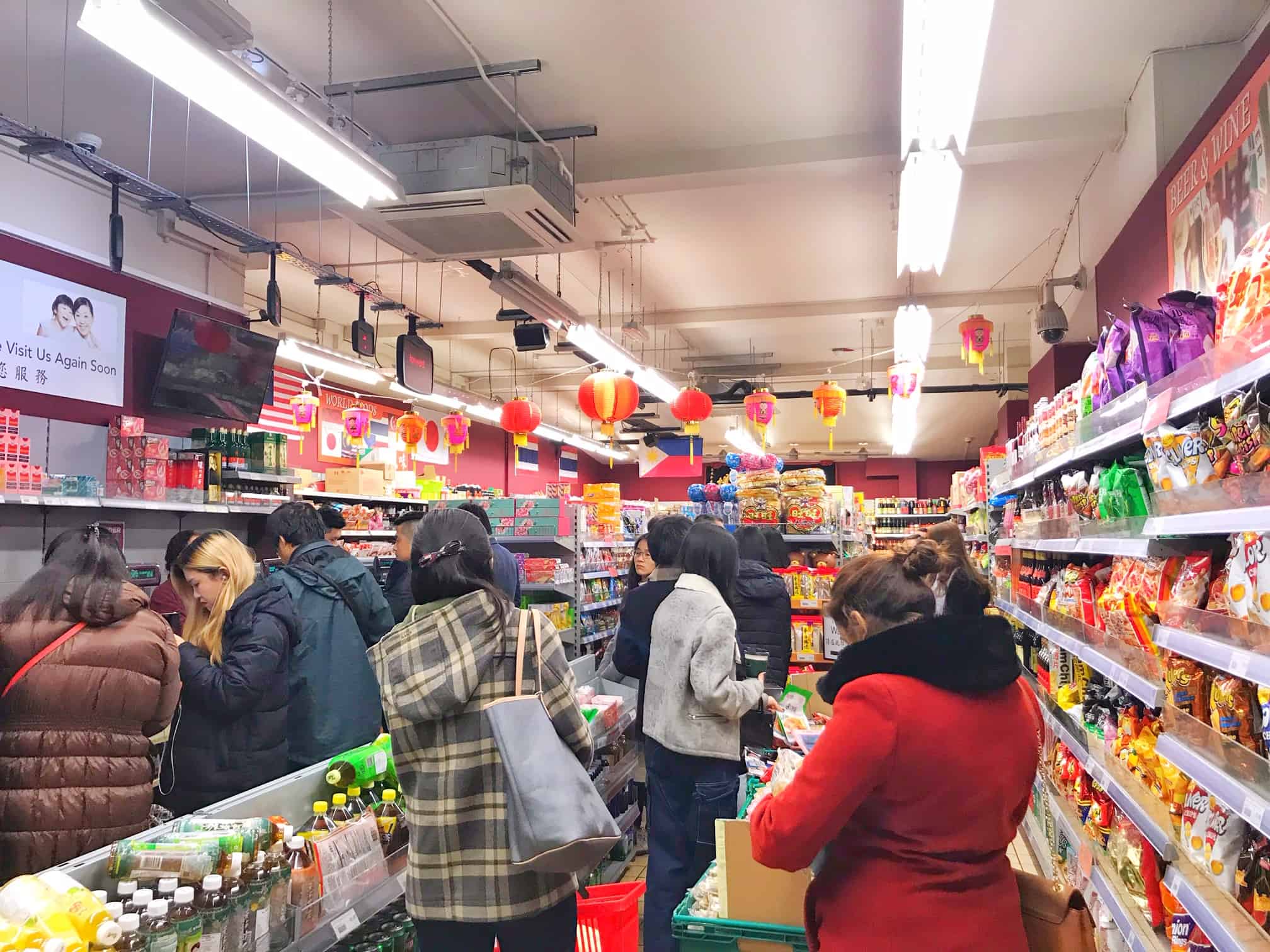 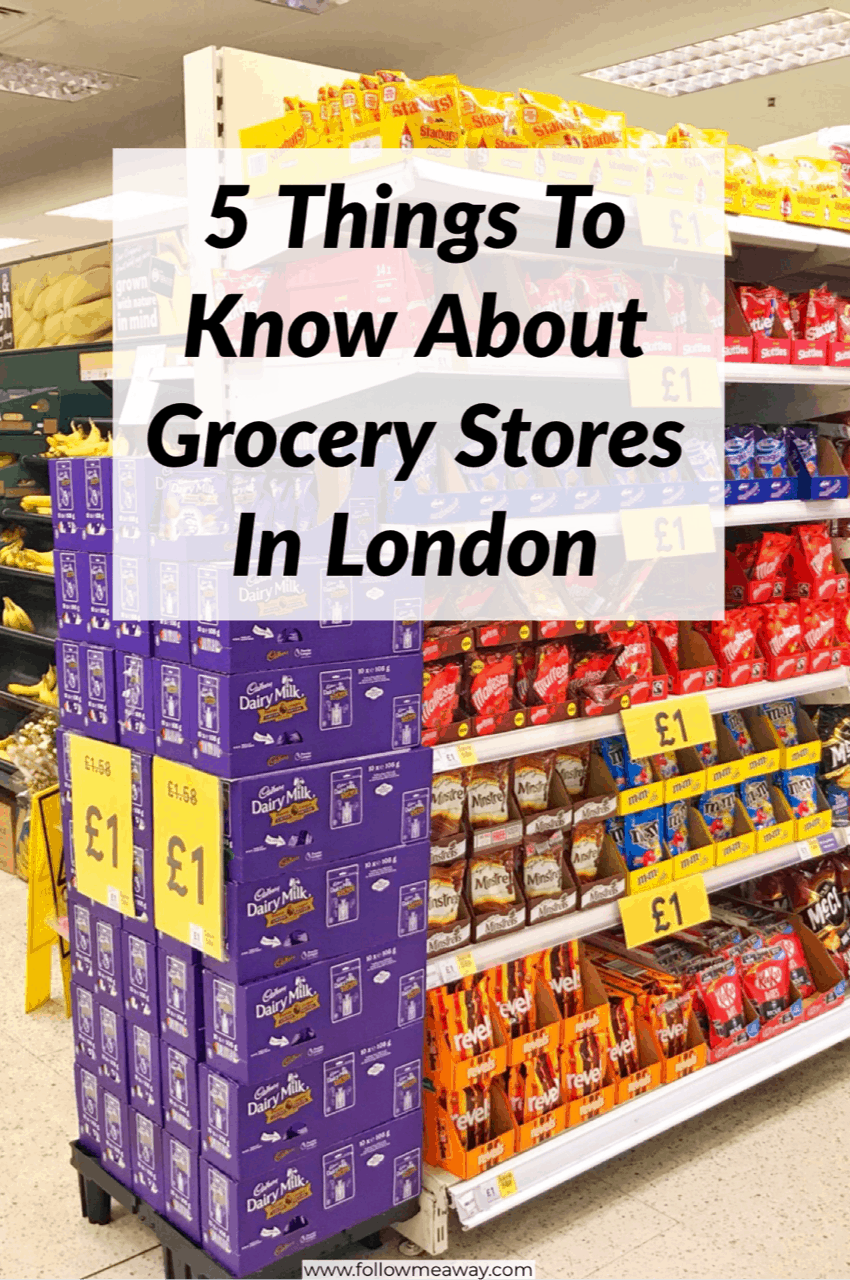 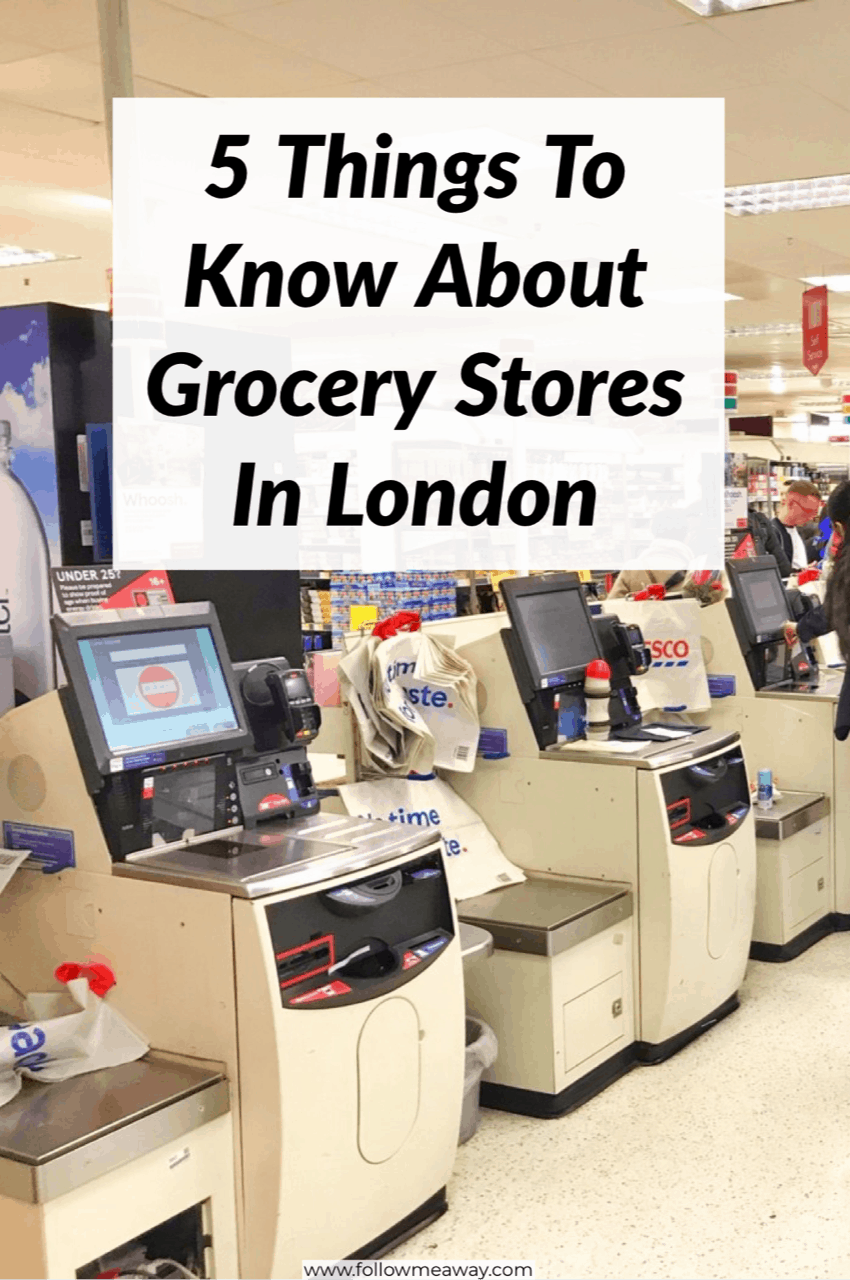 10 Best NYC Photography Locations And Where To Find Them
Next Post: Ireland Packing List: 11 Things You Are FORGETTING!!