When we made the decision to visit Iceland in February, we knew the trip would be challenging. The green countryside was a barren wasteland, and the Ring Road was covered in snow and ice. The weather changed in the blink of an eye and a sunny day became a white out. We had 6 days on the ground and made the best of each and every opportunity we had.

This time, we included our exact photoshoot time so you get a peek into how long we stay out in the elements! Follow us as we explore stops along Iceland’s south-eastern portion of the famous Ring Road:

The first stop of four shoots in a day, Iceland’s hidden waterfall was mysterious but freezing. Because of the cave-like location, we both got soaked. Not a good way to start the day, especially when it was in the 20’s outside! But how could we pass up this stop along the Ring Road?

We stopped at Skogafoss Waterfall twice in order to get the shots we really wanted. As you can imagine, winter in the arctic is freezing and the waterfall generates wind so that didn’t help. We had the ability to get up close and personal with Skogafoss and also to shoot the waterfall with snow and brown soil.

We were lucky to make it to this epic location just before the sun set! The drive along the beach in our rental car was scary because we didn’t have a 4×4, so we stopped about a mile away from the wreck. The sun was quickly setting as we took the long walk, but we arrived just in time. As usual, it was very cold, and the shoot had to be quick and to the point. We wish we had more time at the wreck so we could have shot in and around the plane, but we didn’t want to get left out in the dark and cold of Iceland a mile away from our rental.

We couldn’t get on the basalt rocks because the waves were at least 8 feet in height, so we had to stay a safe distance away. We had to pay attention so that our gear didn’t get wet from the waves. The wind was fierce that day!

Instead of heading to the Skaftafell National Park waterfall like many of our peers, we decided to do something a little different and take the glacial walk from the visitor center. We didn’t intend to shoot, so we didn’t bring any gear. We had to turn around and hike 2 miles back to the car and then back to the location. Like the airplane wreck, we ended up starting right as the sun was setting.

We waited for months to shoot at Stokksness!  We drove the famous Ring Road just 30 minutes outside the town of Hofn and were met with this crazy sight! The contrast between the snow-capped mountain and the beach was stunning. You never get to see tall mountains this close to the sea! We were fortunate to have a sunny day because the next day was a blizzard! 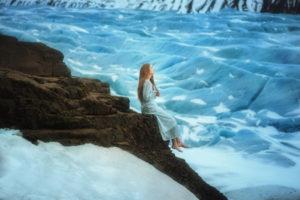 We were thrilled we got to get up close and personal with a glacier while in Iceland! This one was off the beaten path and we loved the deep blue of the clear ice. Instead of adding contrast, we decided to use a light blue dress to match our surroundings.

Shooting Iceland in winter was a magical and freezing experience. Looking back, all of our shoots were so short, yet they seemed to take hours when we were freezing in 20* weather with a 15mph wind chill or getting wet under a giant waterfall. We loved shooting the arctic in its winter state, and can’t wait to go back to capture the greenery of the warmer months!

Have you gone to Iceland? Drop your link in the comments, we would love to see your photos!

Our Experience Visiting La Catrina Taqueria, The First Authentic Mexican Restaurant in Paris
Next Post: Eating Around The World In Paris