An Insider’s Guide To Finding The Best Bathrooms At Epcot 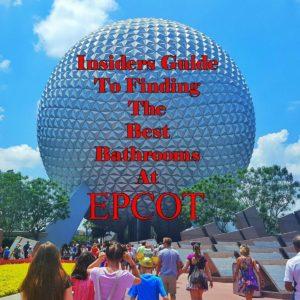 It’s no secret that the Walt Disney World Resort gets busier and busier every year. While Epcot used to be the place for visitors to head in order to escape the crowds, those days are no more. The last thing you want to be thinking about when touring the park is the fact that you have to stand in a long line waiting for the bathrooms at Epcot.

We have been to Epcot 200+ combined times over the years, so we want you to beat the heat and pee in peace as much as possible. Although all bathrooms at Epcot are very clean, some are better overall for their location and the lack of crowds. By knowing where these “lesser-known” bathrooms are and following these simple tips, you can save lots of time that is better spent visiting the attractions.

Save time and take a quick respite from the crowds in the best bathrooms at Epcot: 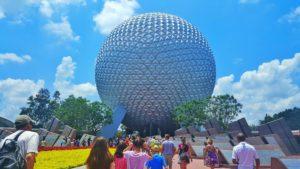 When entering Epcot, save time and do not go to the bathrooms at the park entrance. People flood these restrooms as soon as they park their car/get off their bus/buy their tickets etc. The entrance facilities are often some of the most crowded bathrooms at Epcot.

Crowd flow in the United States and, subsequently, at Epcot, flows to the right. As a result, once inside the park, people will flow to the right of Spaceship Earth [AKA the giant golfball thing in the middle of the park]. Save time by heading to the LEFT of Spaceship Earth and making the East/Left restroom your first bathroom stop of the day. Avoid the entrance and Spaceship Earth west restroom, in lieu of the less-busy east location.

Newsflash: The bathroom on the first floor of the Land Pavilion is located right next to Soarin’, one of Epcot’s most popular/crowded rides. As a result, the first floor bathrooms are always insanely busy as people enter/leave the ride or hang around waiting for their FastPass time or their family to exit the ride.

Instead: The Land Second Floor Restroom

The bathrooms at Epcot’s Future World entrance and frequented by people heading to/from the middle of Future World and the Eastern side meaning they are quickly overrun and the lines are often out the door. These bathrooms are centrally located, making them an attractive option to almost everyone. If you are eating at one of the Epcot restaurants this is a good stop to make along the way to your reservation!

Just because everyone is heading to Future World West, doesn’t mean you have to! One of the least-crowded and best-kept bathrooms at Epcot is found right outside the Imagination pavilion and the “Journey Into Imagination”/Figment ride. Just across a bridge/walkway from the Future World West bathroom, the Imagination Restrooms are secluded, clean, and quiet. If you want space to take a breather or to change your kid’s diaper, this is the best facility in Future World!

Again with the counter-clockwise idea, many visitors enter the World Showcase and head to the right first. Guess what is to the right? A wonderfully located little walk-up food counter and an alluring bathroom right next to it. The Refreshment Port bathroom is super. tiny. and it only has a few stalls! This causes major backup and people are left fighting for the companion restroom instead of just standing in line.

The Odessy Center is a cream-colored building over-hanging the left reflection pool in the entrance area to the World Showcase. Instead of heading right, save time and tour the World Showcase in a clockwise rotation. These bathrooms are often overlooked because they really aren’t near much of anything and you actually have to cross the World-Showcase entrance pool on the far left. If you are waiting on your Disney dining reservation at a nearby restaurant this is a good place to beat the crowds and use the restroom quickly, especially if you have kids!

The American Pavilion actually has two restroom choices and they are both usually moderately crowded. America is located smack-dab in the middle of the World Showcase, and right across from the popular concert venue at the park. On a concert/event day, America’s bathrooms are overrun by people trying to get to/from the venue as quickly as possible.

If you aren’t going to a concert, hold it a little longer and head in either direction around the World Showcase to Morocco and/or Germany. Both of these countries offer bathrooms that are out of the way and line-free. These bathrooms are unassuming and less people know about them ensuring a less-stressful and more private experience for you.

Helpful hint: You can go into ANY Disney restaurant and use the restrooms there as well! They are usually located near the entrance and only take a few moments to slip in and out of. Restroom bathrooms are particularly dead during the afternoon hours, between lunch and dinner! While you are at it, check out some of the best quick-service restaurants at Disney!

Top “Lows’ From Our Spring 2016 Europe Trip
Next Post: Why We Choose To Shoot Faceless Imagery